You are here: Events Calendar / Music & Culture / Cultural Hospitality / Politics: Lunch with a Prominent Politician, with a tour of The House of Commons

We are thrilled to give you the opportunity to see behind the scenes at The House of Commons on a guided tour, where guests will follow in the footsteps of political history as they explore Westminster Hall, St Stephens Hall and both the Commons and the Lords debating chambers.

You will then enjoy a presentation from a highly regarded, prominent politician and take part in a lively question and answer session afterwards.

The presentation will take place at your choice of;

Central Hall Westminster: which has played host to some of the world’s most significant cultural and political events and welcomed some of the best-known public figures, including Winnie Mandela, Mahatma Gandhi and Mikhail Gorbachev

Lancaster House: which is the home of the Government’s Foreign and Commonwealth Office and steeped in political history. Winston Churchill gave a Coronation Banquet for the newly crowned Queen Elizabeth II here in June 1953 and Queen Victoria famously said about the venue, “I have come from my house to your palace”.

This will be a fascinating day, viewing The House of Commons and having an intellectual discussion with a prominent politician, in a stunning venue! With an unprecedented decade of political, economic and social upheaval, this will be a fantastic opportunity to hear from one of the country’s leading politicians of recent times.

Michael Portillo: The former MP and cabinet minister Michael Portillo is now firmly established as a popular broadcaster and political commentator. Alongside television series on Spain, rail travel around Britain and Europe, and the natural world, he shares the sofa for a sardonic look at politics on ‘This Week’ and weighs up ethical dilemmas on Radio 4’s ‘The Moral Maze’. Michael began his career in the Conservative Party research department, developing policies for reducing the role of the state. He then became an advisor to the Secretary of State for Energy, working on privatisation schemes in oil, gas, electricity and coal. In total he served for thirty years in national politics with over a decade as a minister in the Thatcher and Major governments.

William Hague: William served as Party Leader, Foreign Secretary and Leader of the House of Commons. He shares insights into world affairs, different styles of leadership – and why he pressed the Prime Minster on the existence of Father Christmas. His mix of international and domestic experience has given him a deep knowledge of the inside of politics and the reasons for growing instability in world affairs. He speaks with great authority on the impact of technological change, population movement, economic trends and the rise of religious intolerance on our economy and all our lives.

David Milliband: David Miliband served as Environment and then as Foreign Secretary under Gordon Brown – noted for his strong working relationship with Hillary Clinton and his work on human rights. It was inevitable then that, after Gordon Brown’s election defeat, David stood for the Labour party leadership. What made it remarkable was that he stood against his brother and fellow shadow cabinet member Ed. In an incredibly close-run race, Ed narrowly defeated David. As a result, David left front line politics to avoid distracting talk of fraternal rivalries. He now leads the humanitarian relief organisation the International Rescue Committee. Combining insights into both UK and global politics, he considers the shifts in economic power, the effects of conflict, and the problems of globalisation and isolationism. Whilst now focusing on global events, he is still noted as a Labour party insider and often referred to as trying to end the so-called Blairite/Brownite division.

Nick Clegg: Nick Clegg served as Deputy Prime Minister in Britain’s first post war Coalition. As leader of the Liberal Democrats he led the party to their first term in government for 100 years. As Deputy Prime Minister at a time of recession, Nick was part of the leadership team faced with the challenge of economic recovery. He and his party bore the brunt of public and media criticism for the programme of austerity, especially cuts in public spending. (Despite this he became the first government figure to put his head above the parapet on a weekly phone-in show.) Perhaps best known as a passionate pro-European, Nick also battled for progressive policies on civil liberties, social mobility, early years education and NHS mental health treatment. After almost twenty years in politics Nick moved into business, as Facebook’s Vice-President of Global Affairs and Communications, a rare instance of the tech giant making a senior appointment from outside Silicon Valley.

David Blunkett: As Home Secretary David was in charge of security, immigration and policing. He is now Chairman of a multi-Academy Trust and an advisor to easyJet. As well as sharing insights on cyber-crime and crisis management, David considers how leaders can best engage with the public and counter the widespread sense of grievance. He argues for business to take a lead: “You are a part of our communities, not just employers of people with certain skills.” After dinner he takes a lighter look at a life in politics – both highs and lows – from The Queen offering to cut up his meal, to Sarkozy claiming to have intercepted his emails.

John Bercow: John Bercow served as the 157th Speaker of the House of Commons, with a mission to strengthen the backbenches. He was re-elected three times. He also built a reputation as a reformer – requiring Ministers to make 685 statements on pressing issues, replacing the shooting range with a nursery (and dispensing with Mr Speaker’s silk stockings). After stepping down from Westminster, John shares his insights on the future of our politics and the lessons learned about driving change. He is also a seasoned raconteur with countless stories from the corridors of power and an eye out for anyone “chuntering from a sedentary position.”

With our wide network of contacts, we have access to many more political contacts as well, so please contact us for further ideas.

This will be a fascinating day, viewing The House of Commons and having an intellectual discussion with a prominent politician, in a stunning venue! With an unprecedented decade of political, economic and social upheaval, this will be a fantastic opportunity to hear from one of the country’s leading politicians of recent times. 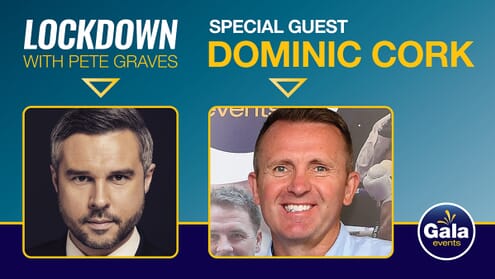 Thanks Brian for a top evening. Thanks, too, to @CMCMarkets @GalaEventsUK and @NickollsPerks whose wine was fabulous! https://t.co/2Vkeo3X0Mu

Congratulations to our brand ambassador @DomSibley on his first Test 💯 on home soil for @englandcricket today 👏#ENGvWI pic.twitter.com/eaq5uWoapw