With the ICC Champions Trophy group games reaching their climax, England welcomed Australia to Edgbaston in front of a full house for a huge match. Having already defeated Bangladesh and New Zealand, the home side were looking very strong to top the group, with the Aussies having had the misfortune of bad weather in their two games, denying them the chance of victories. The stage was set for a fantastic day of cricket, with England knowing a victory would not only guarantee them topping the group, but also eliminating the Old Enemy from the competition altogether.

With the Wyatt Suite sold out for some time, our 80 guests arrived two hours before the match started to enjoy breakfast rolls and a glass of Champagne, with the complimentary bar open all day. Having won the toss, England put the visitors into bat, with the Aussies making a solid enough start before Warner was caught by Buttler off the bowling of the excellent Mark Wood. A great partnership between Aaron Finch and captain Steve Smith seemed to be setting them up for a huge score, but when Finch fell at 136-2, things started to deteriorate. Wickets fell at fairly regular intervals, with the only other player reaching 50 being Travis Head, whose 71 not out held the innings together as the Australians posted slightly below-par total of 277-9.

Pick of the England bowlers was the excellent Mark Wood, who finished with a fantastic return of 4-33, ably assisted by Adil Rashid who tied up the lower order batsmen, posting 4-41. It was a sterling effort in the field, against an Australian team always capable of destructive batting.

Our guests then enjoyed a fabulous Chef’s grazing table lunch, as the players departed the field at the halfway point of the match. As everyone settled down for lunch we were thrilled to welcome our first VIP guest, West Indies’ legendary fast bowler Courtney Walsh, who was the world’s leading Test wicket-taker at the time of his retirement with 519 victims. It was fantastic to hear from Courtney about his time terrorising the world’s best batsmen, mostly in tandem with the equally fearsome Curtly Ambrose. Toward the end of lunch we were then joined by two regulars in our Lounge, Dominic Cork and Nick Knight, who set the scene with their thoughts on how play might develop during England’s innings.

In the event, England got off to a shocking start, losing both Jason Roy and Alex Hales inside 2 overs, and then talismanic batsman Joe Root, leaving the home side flailing on 35-3, with Josh Hazlewood picking up two wickets. Stepping in to the fray, captain Eoin Morgan and Ben Stokes then rescued the situation with one of the great One Day partnerships seen at this famous old ground. In a brutal display of power-hitting by both men, they added an effectively match-winning partnership of 159, with Morgan smashing 87 off just 81 balls, and Stokes reaching an unbeaten 102 as England comfortably made the ground. The only blemish was Morgan’s run-out, but an assured unbeaten 29 from Jos Buttler helped see England home comfortably on the Duckworth-Lewis method, as rain brought the innings to a premature end.

During the excitement of the second innings, the complimentary bar was in constant flow, and guests also enjoyed a traditional Edgbaston afternoon tea of sandwiches, cakes and snacks, to help soak up the booze. Although rain finished the match very slightly early, by that stage England were only 37 runs short with almost 10 overs left and 6 wickets in hand, so no complaints could be had by the Aussies who in the end were handsomely beaten. It was into the knock-out stages as group winners for England, whilst the Aussies were on the plane home!

Our thanks to all our clients who made it such an enjoyable day, and to the Edgbaston team for their customary outstanding service and fine catering. 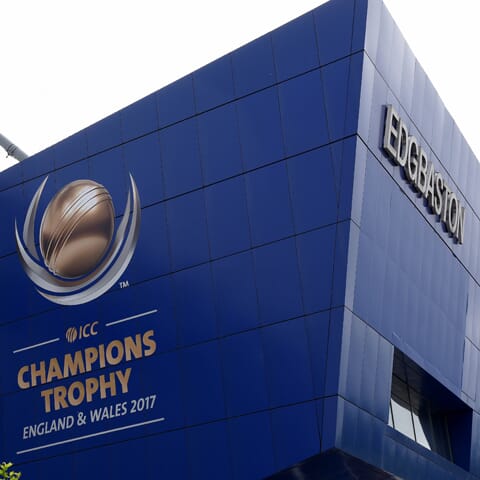 Jos Buttler appeals in vain to the umpire 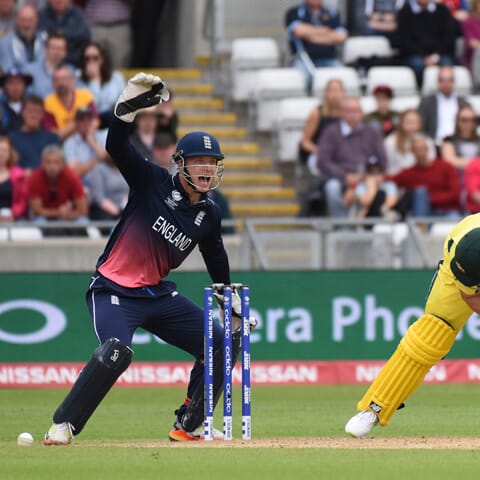 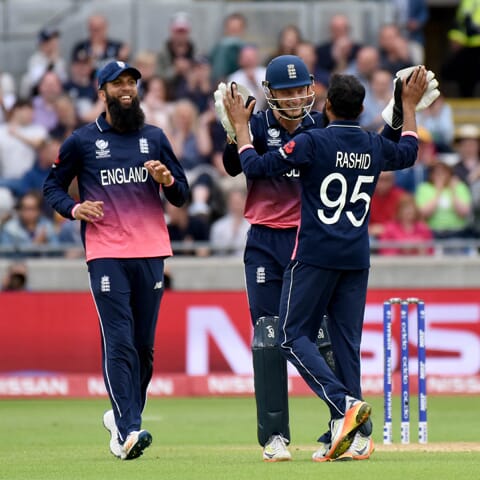 Mark Wood was in sensational form, picking up 4 wickets 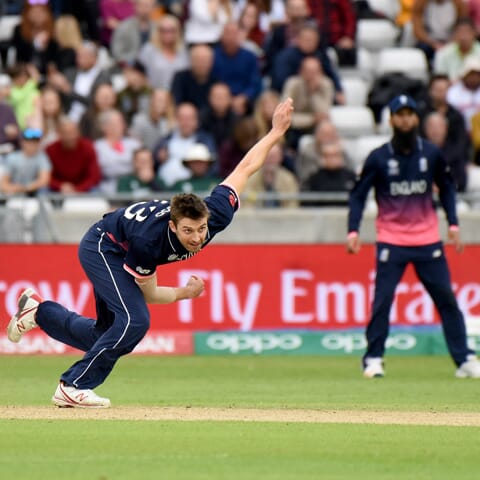 Guests settling down for a delicious lunch 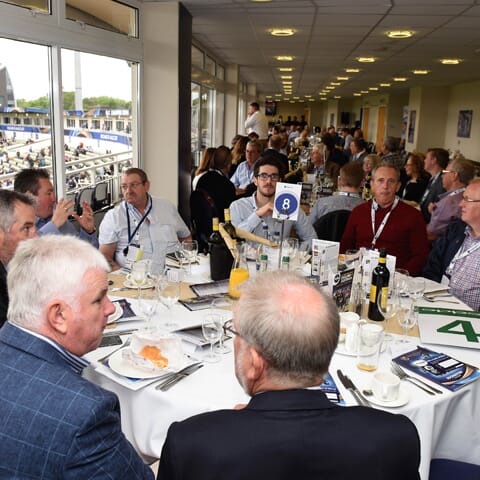 It was great to hear from West Indies legend Courtney Walsh 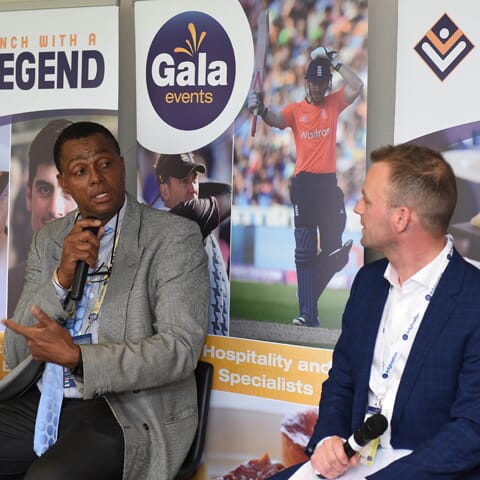 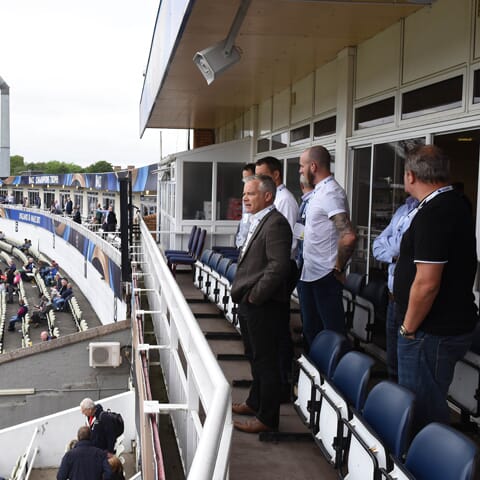 Courtney Walsh with a group of guests 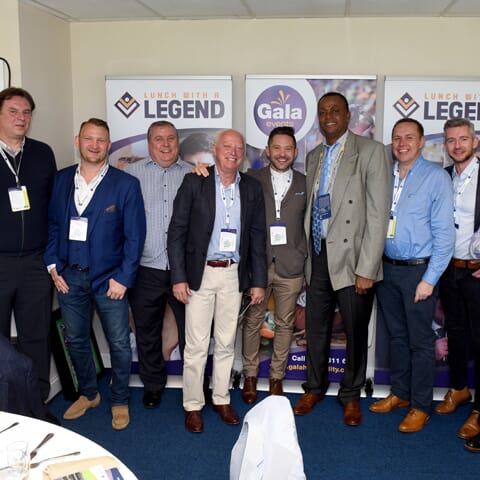 Our event menu card for lunch 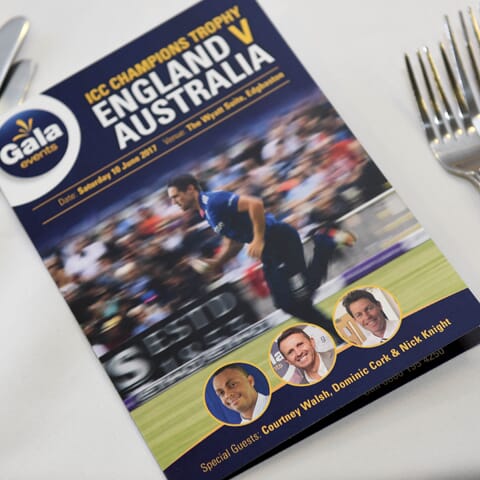 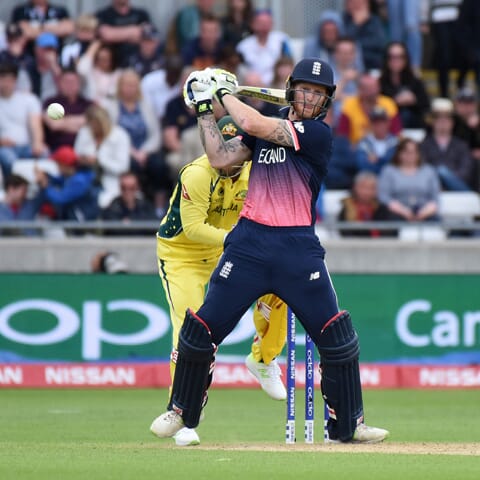 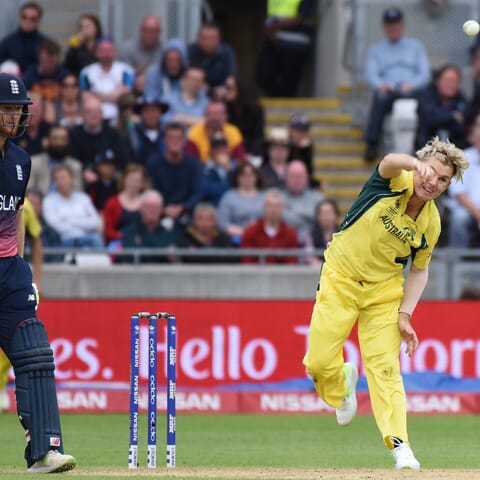 Stokes clips another one away 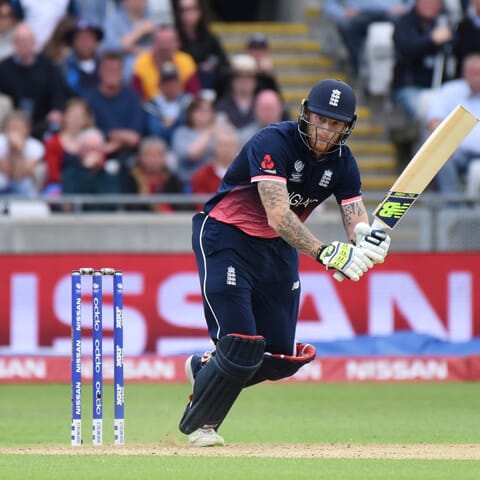