Top class professional cricket was the order of the week as the Cornish Cricket Festival took place in mid June at Boscawen Park, home of Truro Cricket Club, organised by Cornish Sporting Club, a sister company to Gala Events. After securing two high profile Yorkshire Bank 40 fixtures between the Unicorns and Somerset, and Notts Outlaws and the Netherlands, all eyes were on the weather forecast in the few days leading up to Cornwall’s premier sporting event. With the ground looking spectacular, and the rain for the most part holding off, the week proved to be a huge success, culminating in the Festival Dinner at which England, Liverpool and Newcastle legend Kevin Keegan was the star speaker.

The opening fixture of the Festival was the hotly anticipated clash between local favourites Somerset captained by Marcus Trescothick, and the Unicorns who were led by former Somerset and Cornwall star Keith Parsons. Somerset were taking no chances against the underdogs, fielding a number of internationals including Nick Compton, Craig Kieswetter and South African Dean Elgar as well as star all-rounder Peter Trego and the YB40 competition’s leading bowler Craig Meschede.

Somerset won the toss and chose to field, and must have been somewhat surprised at the excellent start made by the Unicorns opening pair Tom Lancefield and Matt Lineker, who put on an impressive 76 in just 12 overs, before the latter was bowled by Trego for 36. The innings continued to tick along nicely, eventually reaching a creditable 231-8 from the allotted 40, with ex Surrey player Lancefield top scoring with 80. He was ably supported by Lineker, and Scott Elstone who hit 38. Craig Meschede continued his outstanding form with the ball in the YB40 competition, picking up an excellent 4-43 from his 8 overs.

Unfortunately, after a blistering start by Peter Trego which saw Somerset hit 23 from the first 2 overs, the rain finally came in earnest, and the game had to be abandoned with both sides taking 1 point each. However, the enthusiasm of the crowd throughout the day could not be dampened, and almost 200 corporate guests enjoyed post match interviews in the hospitality marquee with players from both sides.

On a glorious sunny day, the second YB40 clash saw the improving Netherlands taking on Notts Outlaws, who were the stand-out team on form in the competition. Notts fielded an extremely strong side with seven international stars including England’s Samit Patel, Alex Hales, Michael Lumb and Ajmal Shazhad, and current Aussie Test opener Ed Cowan. After winning the toss, Netherlands captain Peter Borren opted to bat first on a flat dry track, in the hope of putting the Outlaws under pressure with a big total.

However, with Ajmal Shazhad steaming in with menace, the ‘home’ side were soon on the ropes with both Michael Swart and Stephan Myburgh departing cheaply at the hands of the England seamer. Fortunately for the Orangemen, Tom Cooper and Wesley Barresi were in decent nick, adding 47 for the third wicket, before the latter holed out to Steven Mullaney off the bowling of Sam Wood. The Dutch then built their innings steadily with good contributions from James Gruijters, Dom Michael and captain Borren, with Cooper top scoring with 49 to take the total to 188-7 from their 40 overs. Pick of the bowlers were Shazhad and Mullaney with 2 wickets apiece, ably supported by Sam Wood and Luke Fletcher.

The Notts reply got off to a nightmare start, with out-of-from England T20 star Alex Hales lobbing a dolly to Borren off the bowling of delighted debutante Quirijn Gunning. This was only a temporary blip however, as the diminutive James Taylor and Michael Lumb put on a quickfire 83 partnership to take the score to 86 before Lumb was caught by Borren off the bowling of Tom Cooper. Notts continued to make steady progress towards their target, with Taylor in excellent form, although the Netherlands’ bowlers kept the pressure on by removing Patel, Cowan and Chris Read, none of whom made a telling contribution with the bat. It was left to the rock-solid Taylor and Steven Mullaney to bring their side home with 7 balls to spare, with the latter’s explosive 26 off just 16 balls taking the pressure off, and Man-of-the-Match Taylor carrying his bat for a superb 90 not out.

After a thrilling afternoon of cricket, both squads joined delighted guests in the corporate marquee for a post match beer, with numerous players doing post match interviews on the marquee stage.

The week reached a superb climax with the Festival Dinner, at which England legend and twice European Footballer of the Year Kevin Keegan wowed well over 300 guests with a scintillating after dinner speech. By the time Kevin got up to speak it is fair to report that the party was in full swing, with the St Austell Brewery bar doing a roaring trade in local favourites such as Tribute and Cornish Rattler. Just as in his playing days, Keegan’s performance was fully committed yet packed with verve, balancing skilled delivery with an up-tempo pace which had the crowd cheering for more. Some of the highlights included tales of his ‘legendary friendship’ with Fergie and the infamous 1996 rant about the Scottish one, playing with England legend Bobby Moore, why he picked a fight with Billy Bremner (he was the smallest man on the pitch!), and sporting THAT hair-do! It was a 45 minute tour-de-force from one of England’s favourite footballing sons. Other highlights were a silent memorabilia auction which included a signed Lionel Messi shirt and England cricket bat, and 45 minutes of quality stand-up from comedian Austin Knight.

The general consensus over the week was that the 2013 Cornish Cricket Festival was a triumph, building on the great success of the first event the previous year. Spectators were treated to some outstanding cricket, and on the whole the weather remained kind for the majority of the week. Thanks must go to Truro Cricket Club for all their hard work, and to Truro Marquees who provided high class hospitality and delicious food to well over 1000 corporate guests over 5 major events.

Read more
The Unicorns openers Lancefield and Lineker running between the wickets. 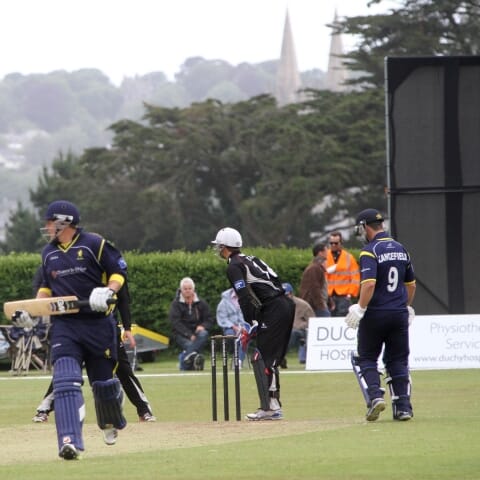 England opener Nick Compton in the field for Somerset. 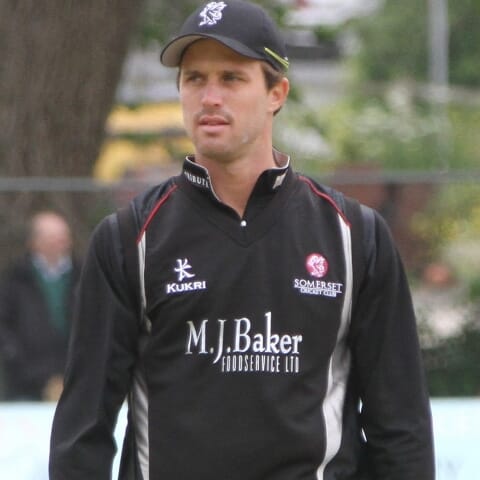 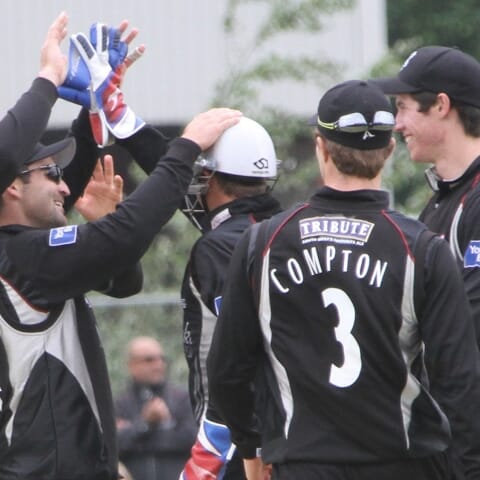 Corporate guests enjoying the action in Truro outside the hospitality marquee. 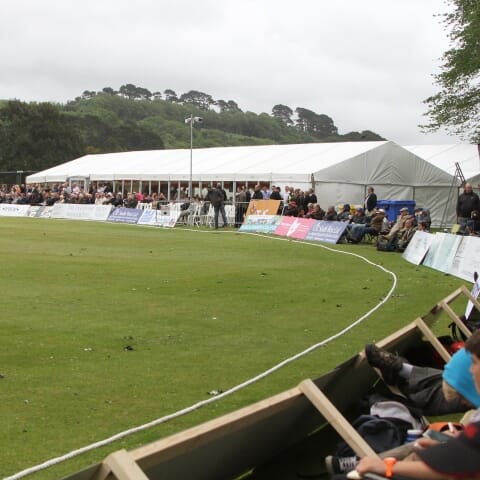 Unicorns captain Keith Parsons powers one to the boundary. 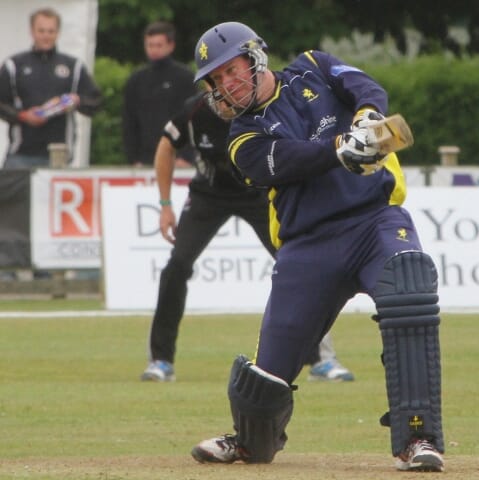 Somerset's Peter Trego lashes a ball to the boundary. 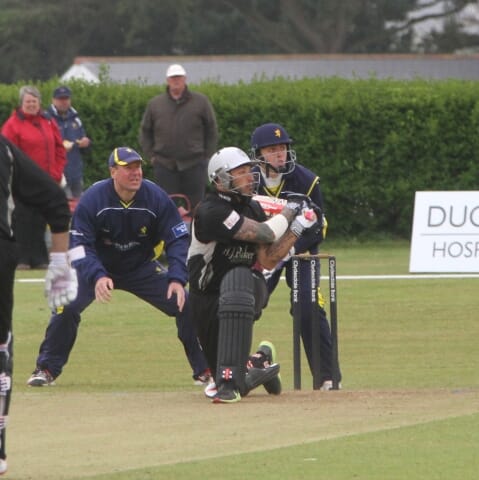 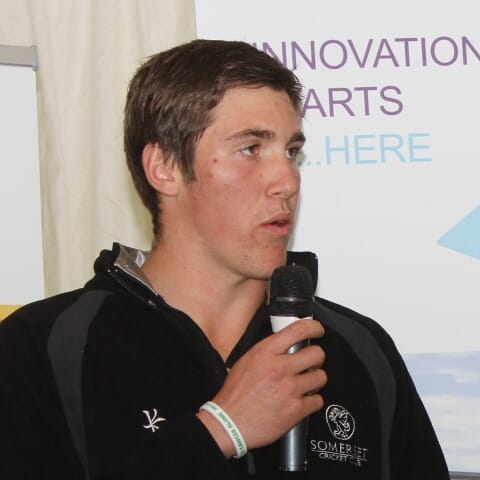 England and Notts all-rounder Samit Patel spins another one down in Truro. 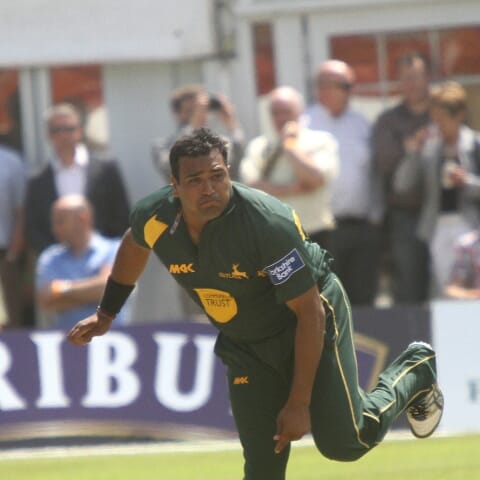 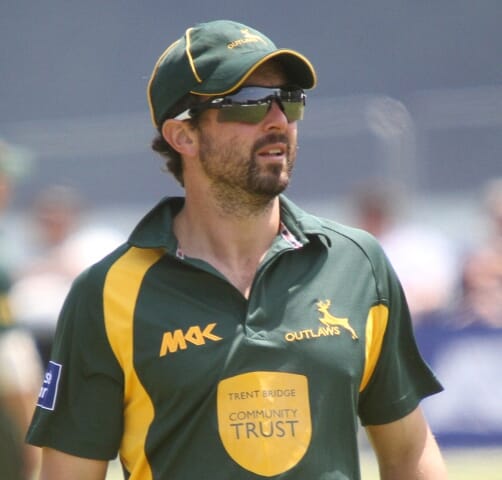 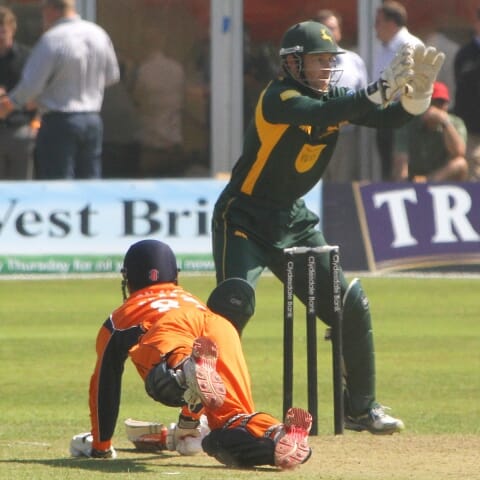 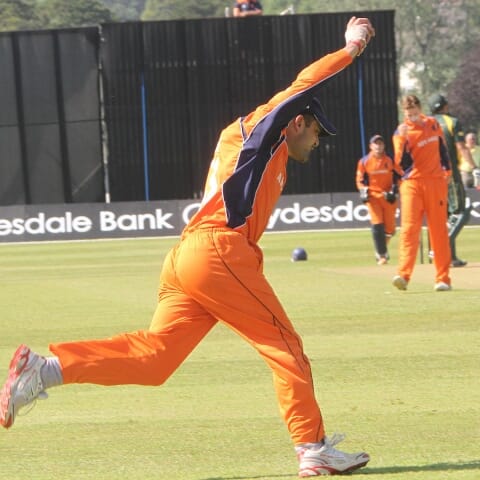 Man of the Match James Taylor cuts a Netherlands bowler for 4. 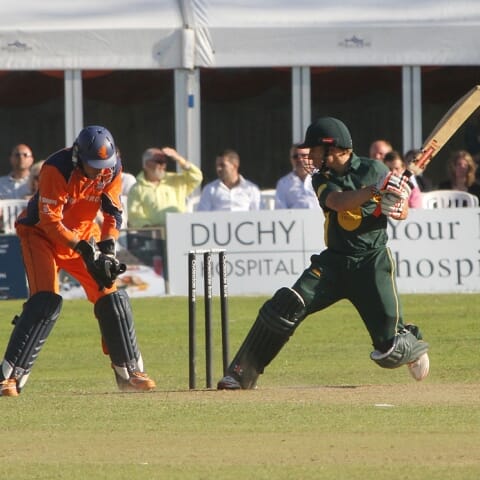 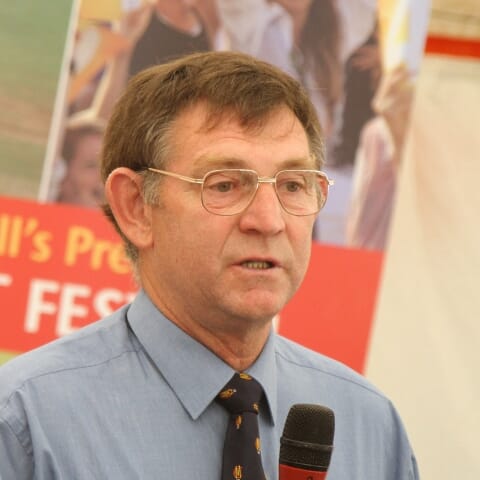 Samit Patel, Stephen Mullaney and Ed Cowan relax with a pint whilst doing a post match interview in the marquee. 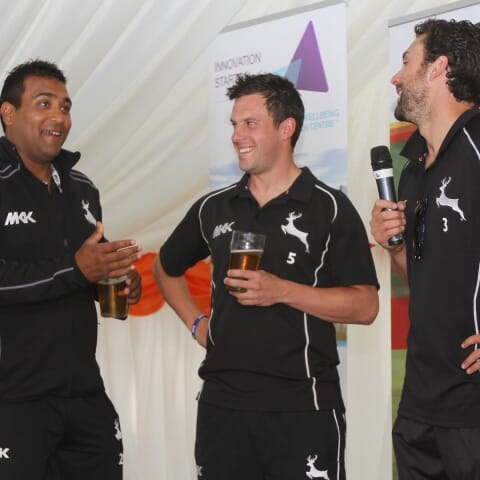 Kevin Keegan entertains guests with tales from on and off the pitch. 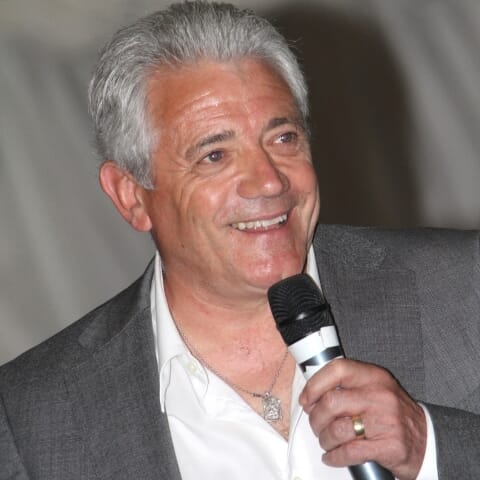 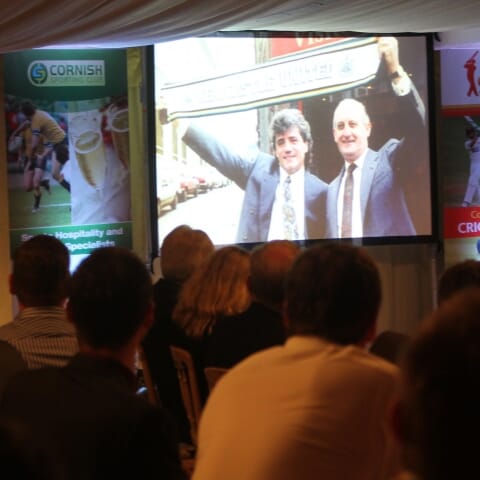 The girls having a great time as Keegan finishes to rapturous applause. 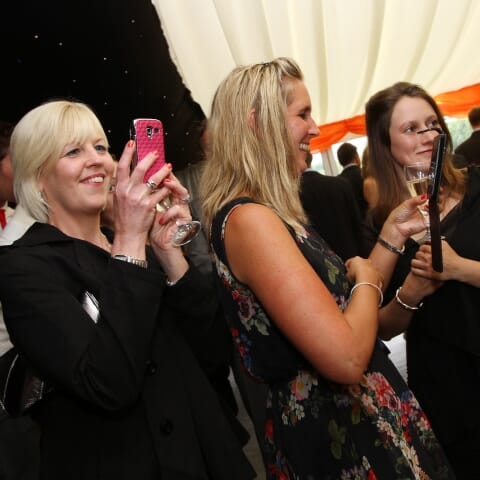 The marquee is buzzing as the evening progresses. 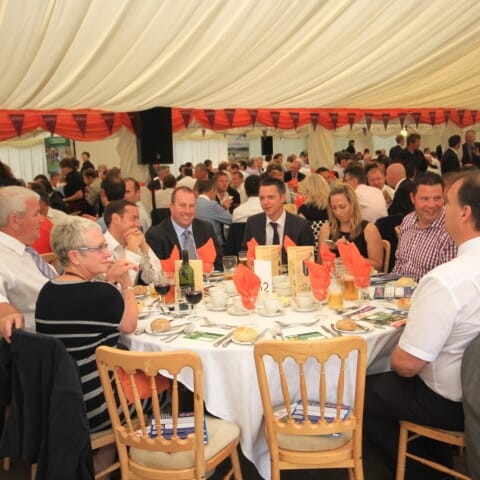 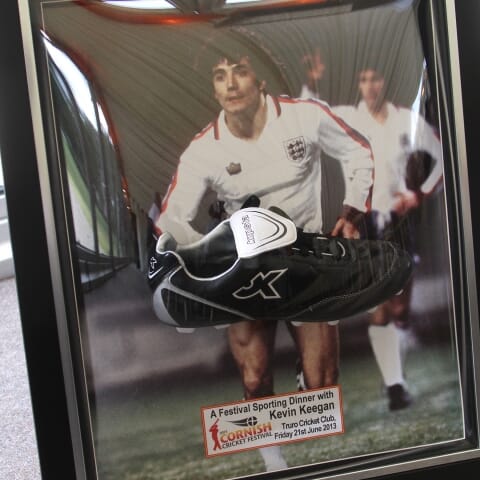 Comedian Austin Knight has the crowd in stitches during his stand-up routine. 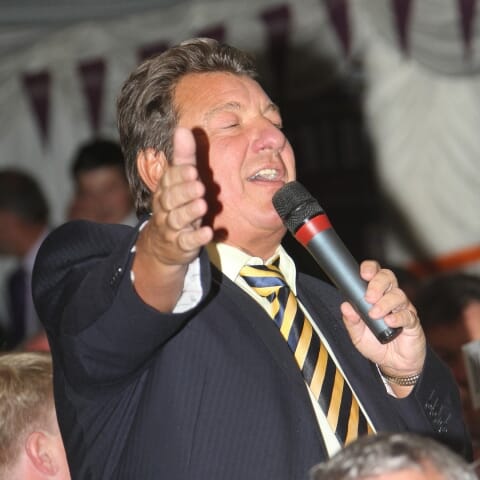 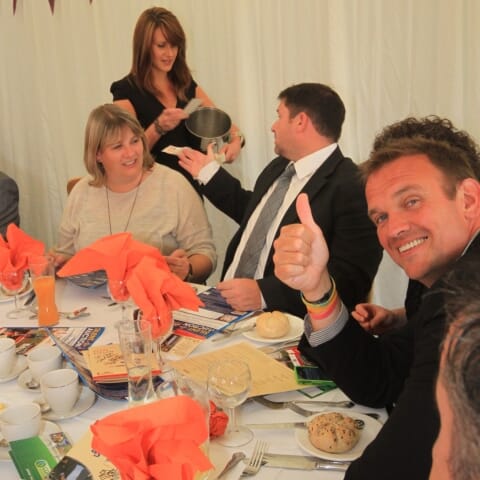