With the British and Irish Lions tour of New Zealand at a pivotal point in the series, we welcomed around 200 guests to the Royal Windsor Suite at Windsor Racecourse for a day of world class rugby and quality horse-racing, which will live long in the memory. Joining us for a morning of astonishing rugby were Lions Legends representing each of the four nations; former England captain Martin Corry, Welsh wing wizard Ieuan Evans, Irish full-back Geordan Murphy, and Scottish centre Scott Hastings. Our Sky Sports host Pete Graves was once again the man in charge of proceedings.

It was an early start as guests arrived from 8am for the kick off at half past. The Lions had been comprehensively outplayed in the First Test, and went into the Second Test as big underdogs, with the bookies offering 5-1 against a victory for Warren Gatland’s men. The atmosphere was buzzing straight away with so many huge rugby fans in the room, and the match didn’t disappoint. In a nerve-jangling first half, Beauden Barrett and Owen Farrell exchanged penalties, before the pivotal moment of the match, and arguably the entire series. A reckless shoulder charge by talismanic centre Sonny Bill Williams to the head of Anthony Watson resulted in a red card for the All Black, and it was truly game on!

Initially the Lions struggled to capitalise on their man advantage, with Barrett and Farrell swapping two penalties each, with Farrell’s second a beauty which tied the score at 9-9 going into half-time. Our four Lions legends grabbed a mic each for some half-time analysis, with the feeling being that although the game was there for the taking, the Lions would need to play a lot better even with the extra man. It was gripping stuff.

The second half kicked off, and the atmosphere was electric. The Lions were certainly matching the All Blacks for physicality, but again it was Beauden Barrett who drew first blood with a penalty, swiftly followed by another one to make it 15-9 to the home side. A very daft challenge from prop Mako Vunipola saw him yellow-carded, and with Barrett slotting another penalty the writing seemed to be on the wall for the Lions who desperately needed a score.

With half the room on their feet, it was that man Taulupe Faletau who capitalised on a superb cross-field move by the backs, brushing aside Israel Dagg to go over in the corner. Suddenly it was game on again, despite Farrell missing a difficult conversion from the touch-line. With the Lions in full flow, New Zealand suddenly started to look ragged, but once again a bit of Lions indiscipline offered Barrett another penalty which he duly slotted, putting the All Blacks up 21-14.

Cue a moment of magic from hooker Jamie George, who picked a superb line to collect a Jonny Sexton pass, with Conor Murray sniping through to score a legendary try. The nerveless Farrell pinged over the conversion to tie the scores at 21-21 with a little over 10 minutes to play.

With just 4 minutes of a pulsating encounter left, replacement prop Kyle Sinckler was taken out in the air by Charlie Faumuina, offering the chance for Farrell to put the Lions in the lead for the first time from 30 metres out – a chance he didn’t pass up! The next few minutes were the longest in history for Lions fans, with New Zealand coming within feet of scoring a try, but they held out for one of the most famous victories in the history of the game!

The celebrations in the room were immense, and the relief palpable. Our Legends took the mics and proceeded to give some memorable post-match analysis, it was clear they were as thrilled as anyone in the room. It was a pleasure to hear from guys who had been on Lions tours, some victoriously; who will ever forget Ieaun Evans’ famous series-clinching try in Australia in 1989! As well as analysis of the match, it was great to here from the guys about some of the highlights of their careers. With 272 international caps for their respective nations, and 18 Lions Tests between them, there was plenty to discuss.

With the bar in full flow, everyone settled down for a superb three course lunch, with our Legends joining sponsors’ tables to entertain guests. After a long morning of excitement, not to mention a few drinks, everyone was ready for a good meal before the afternoon’s racing at the track. With a superb balcony directly outside with views over the finishing line, everything was set for a great afternoon.

In the event, the big Handicap of the day provided a thrilling finish, with 7-2 shot King Bolete pipping the 11-4 favourite What About Carlo by a neck in a bustling finish. The most valuable race on the card was the Listed Midsummer Stakes, which provided an even tighter finish, with the 11-4 Morando pipping the 6-4 favourite Stormy Antarctic by a short head. There were many happy punters in the room on the winners! The views of the finish were spectacular.

By the time the racing finished, it’s fair to say there were a few well-refreshed clients in the room after a long day of top class sporting action. The hardiest stayed on for some post-race live DJing from Vernon Kay, and danced away into the evening.

All in all, one of the best events we’ve ever had! 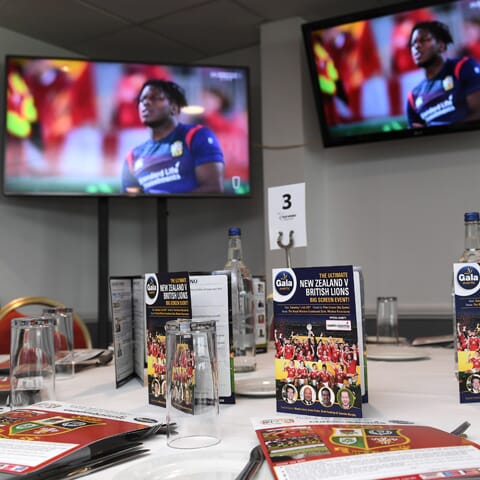 Tables all set for a cracking day of rugby and racing 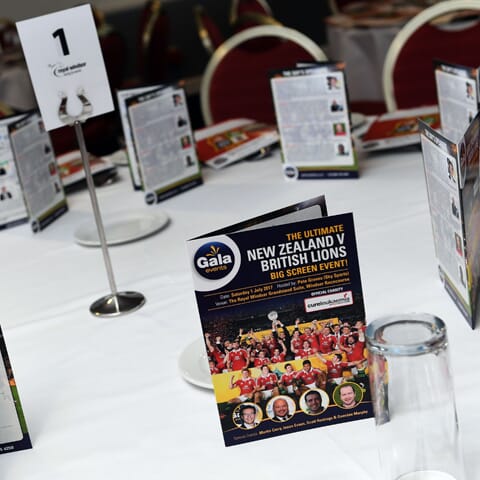 One of our lucky male guests with four lovely ladies 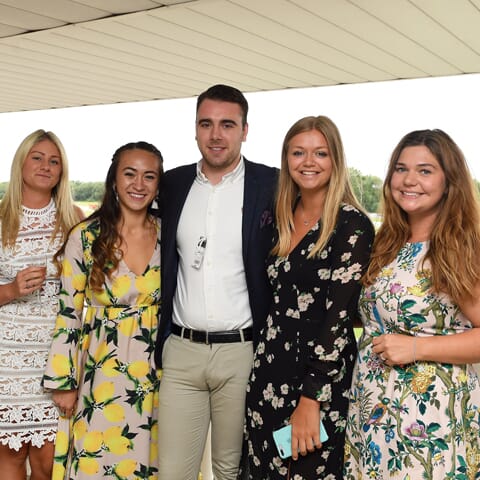 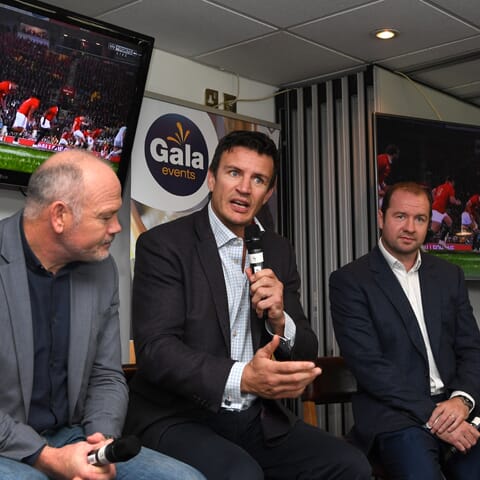 A couple of our guests with our four Lions Legends 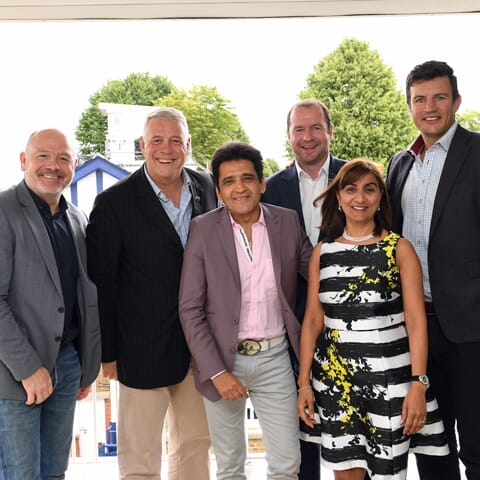 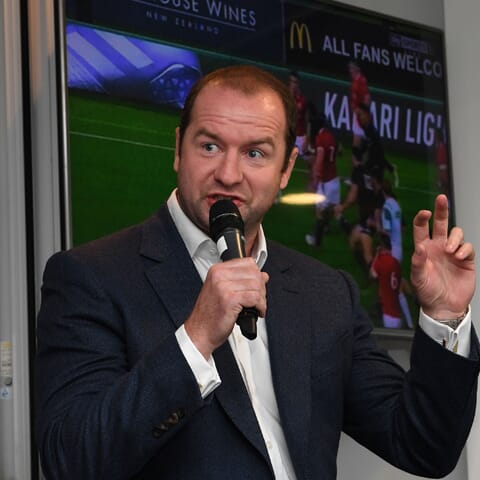 Martin Corry and Pete Graves watching as the match kicked off 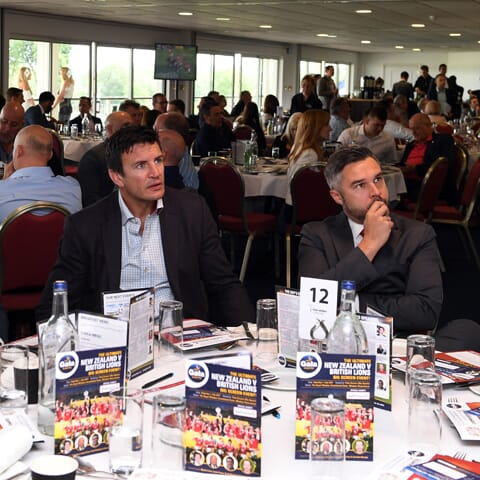 Taulupe Faletau try for the Lions was a fantastic moment 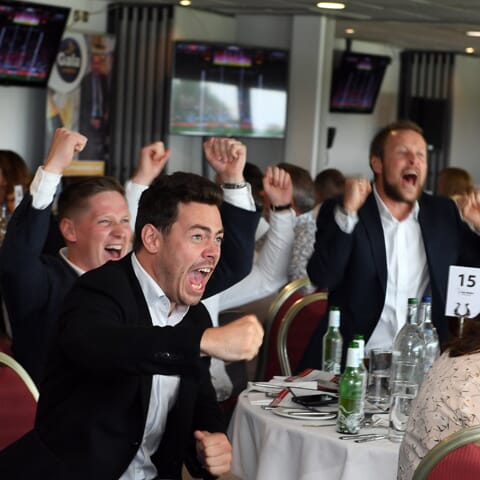 Guests cheering as the Lions levelled the score at 21-21 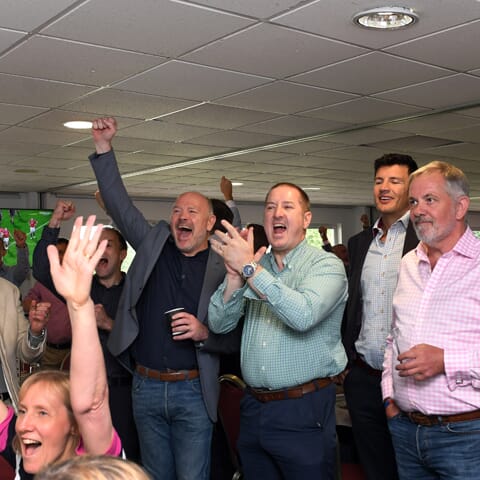 Scott Hastings does a victory jig after the final whistle! 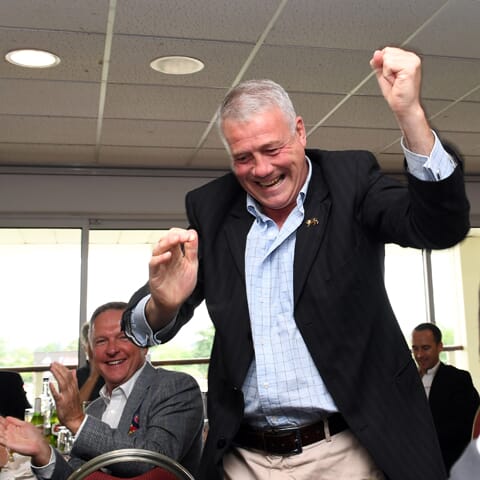 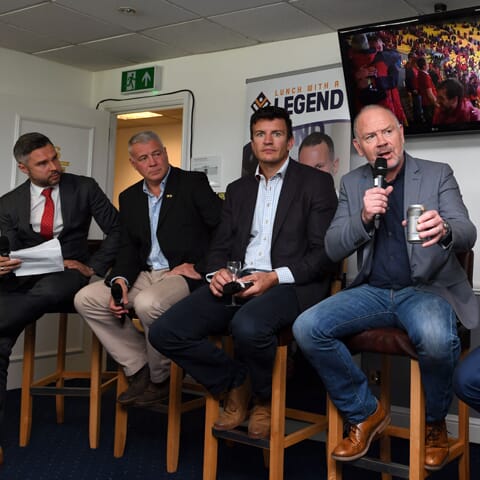 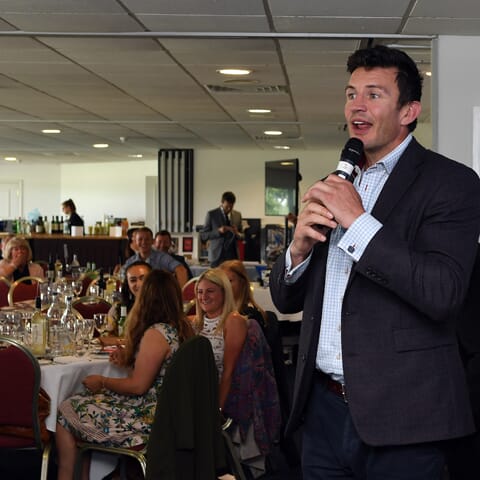 A group of guests posing with our Legends 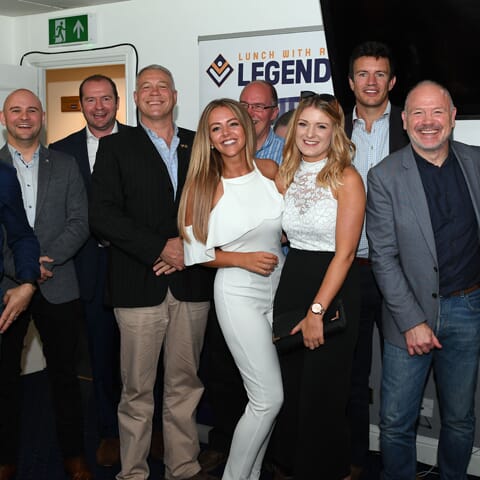 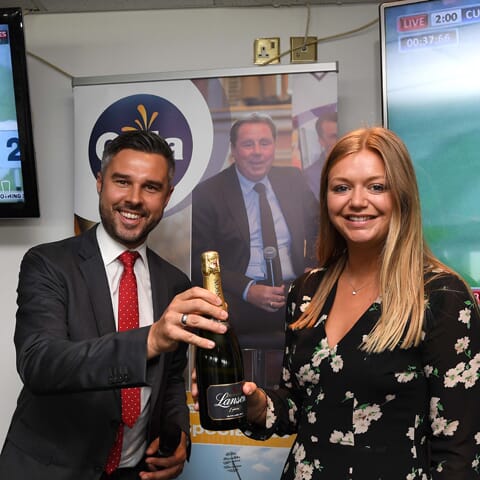 A delicious lunch was enjoyed by all 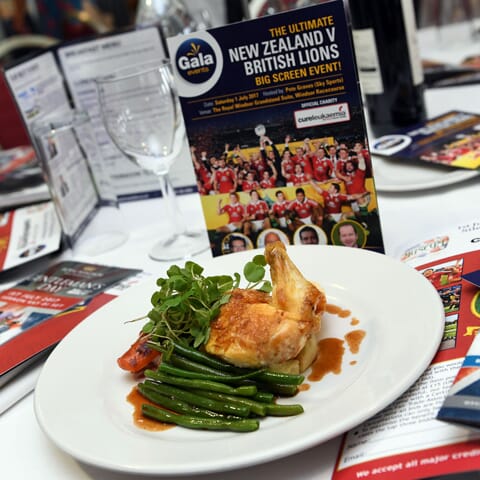 There was a full card of quality racing, with great views from the balcony 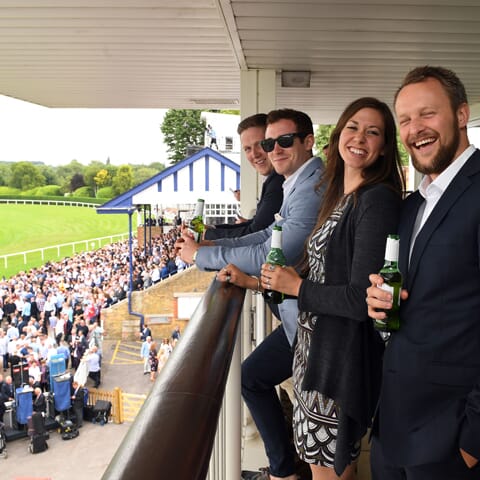 Views over the finish line were cracking 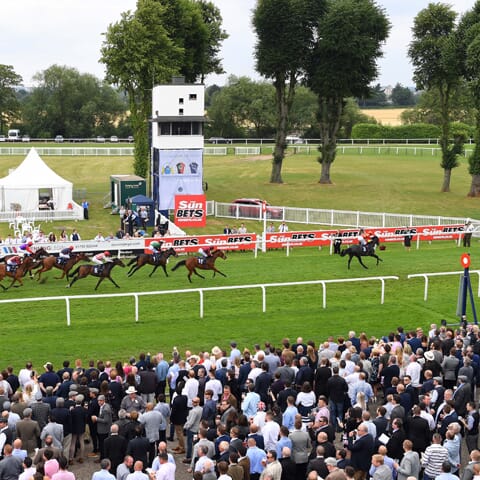